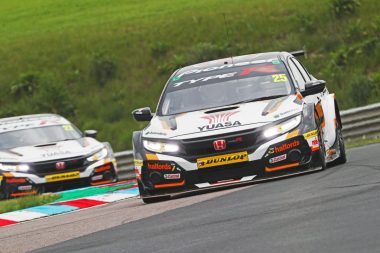 Team Dynamics could have an entirely different line-up in this year’s British Touring Car Championship. Picture by Jakob Ebrey Photography.

TEAM Dynamics’ 2021 British Touring Car Championship will officially get underway on the weekend of May 8 and 9 – after the calendar for the forthcoming season was confirmed by organisers TOCA.

The Droitwich Spa-based team will have a new look on the grid this term after the acquisition of three-time BTCC Gordon Shedden, who replaces Dan Cammish – a front-runner in the past couple of seasons who has now moved on to Team Redline Racing.

While Team Dynamics’ second driver for the new campaign is still to be decided, with team director Matt Neal yet to confirm whether he will be racing or bringing in another new face to fill the hot seat, the publication of the racing calendar will at least build excitement within the camp and for motorsport fanatics alike.

After the opening rounds at Thruxton at the beginning of May, the event at Snetterton gets underway on June 12 and 13 – the two meets set to be affected by any remaining restrictions on spectators being in attendance.

Spectators are then expected to be in full force from then on, starting with the Brands Hatch event on June 26 and 27, with Oulton Park [July 31/August 1], Knockhill [August 14/15] and the second Thruxton weekend [August 28/29] completing the summer programme.

The Championship resumes with back-to-back events at Croft on September 18 and 19, and at Silverstone on September 25 and 26, before the penultimate event at Donington Park on October 9 and 10.

Team Dynamics then hope to still be in contention for silverware when the season concludes in the second Brands Hatch meet, held on October 23 and 24.