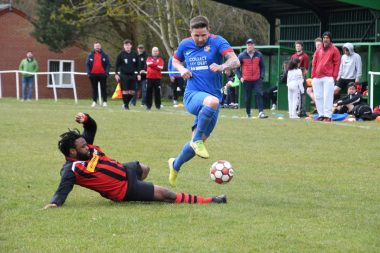 Despite the long lay-off, both sets of players gave full commitment. Pictures by Paul Smith.

Keith Draper’s Swans finished on the right side of a 2-1 scoreline at the Recreation Ground, overturning the single-goal deficit facing the hosts in a first half played with an entirely different XI, thanks to second-half goals from Zac Brown and Peter Jenvey.

Fairfield went into the friendly fixture knowing that a difficult encounter lay ahead, regardless of Bilbrook playing football at the step below, with the Wolverhampton club topping West Midlands (Regional) Division Two with an unbeaten record prior to the curtailment of the 2020/21 season. 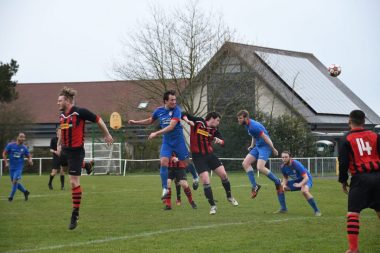 And so it proved, with both sides cancelling each other out until Santos’ breakthrough goal on the half-hour mark.

With a different set of players entering the fray for the second half – but for the exception of the influential Luke Dugmore – Fairfield eventually came into their own.

Brown showed the cutting edge needed when hauling Villa level with a clinical finish early in the half, as the opposition goalkeeper now proved the only man preventing the hosts from taking the lead with a string of crucial saves.

But while Jenvey was one of those players to be denied, he would not be prevented from burying a Dan Ludlow corner to tip the match in favour of the Swans.

Darren Green swept home Barnt Green’s opener into the top corner midway through the first half, while Connor Dixon capitalised on some indecisive goalkeeping to double Spartak’s advantage five minutes after the restart.

League rivals Hampton eventually drew level with two goals in two minutes, before hitting the front late on to down GJ Singh’s side. 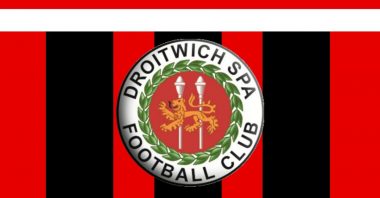 Andy Crowther’s charges had to hold firm to weather the storm from the Dale, before netting against the run of play when Connor Collins crashed home a first-half penalty.

While the visitors continued to threaten, it was the Saltmen who struck the all-important second, ultimately settling affairs when Charlie Tilley tucked home from a matter of yards.