Spa have tails up after Cox wins the day against Peacocks 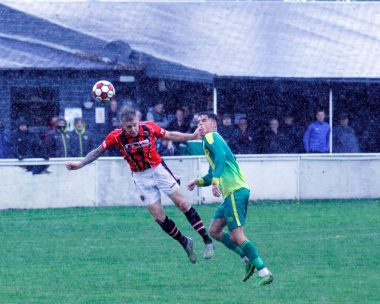 LATE delight was in store for ten-man Droitwich Spa after Jordan Cox struck at the death to hand his side a 3-2 success against Gornal Athletic.

The visitors from Dudley proved plucky customers at Walshes Meadow last weekend, coming from two goals behind and threatening to snatch all three points in the West Midlands (Regional) Division One encounter.

Even with Connor Collins seeing red after notching twice on the scoresheet, the Saltmen were able to navigate the tricky task at hand to go second, two points behind AFC Bentley having played a game more – with a trip to eighth-placed Wellington Amateurs next up on Saturday (3pm).

After dominated the first-half proceedings, a trip on James Lemon inside the penalty area allowed Collins to drill the resulting spot-kick low into the bottom corner to give Droitwich the lead.

Spa were in control even with just the single goal to show for their efforts at the break, though they appeared to be cruising to victory when Collins added a second ten minutes into the second half.

The striker expertly lifted an effort goalwards over Gornal ‘keeper Josh Raden, clipping the crossbar on the way in.

Droitwich’s insurance goal only seemed to spur Athletic on though, with a period of pressure resulting in a two-goal quickfire salvo that drew the visitors level midway through the half.

And when Collins saw red for violent conduct in the final 15 minutes, an uphill battle lay ahead.

It was Spa who won the day though, with Cox in the right place at the right time to pounce from a matter of yards out and end the Peacocks’ perfect start to the season.