Smith deal boosts Spa; Davies at the double against Inkberrow - The Droitwich Standard

Smith deal boosts Spa; Davies at the double against Inkberrow 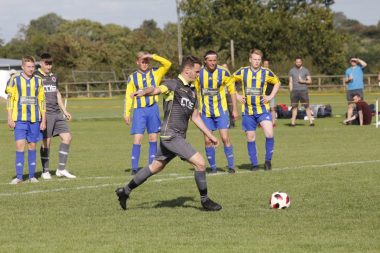 The 30-year-old became a stalwart of a Raiders side that won promotion to the West Midland (Regional) League Premier Division in 2018/19 – a feat that Spa hope to replicate this term.

Owen said: “I’m really happy to add Paul to the squad – he will give us added experience as he has been through a championship-winning campaign in our league.

“He has strong character and will bring more leadership qualities to this team.”

A final pre-season warm-up before the beginning of Spa’s Division One campaign resulted in a 4-1 triumph over Sporting Club Inkberrow of the Hellenic League on Saturday.

It was not all plain sailing, however, with Inkberrow initially taking the lead before Connor Collins’ penalty levelled up the scores.

Scott Braiden-Smith then headed the Saltmen in front just before the break after Collins unselfishly laid on the ball for his team-mate to score.

And, with a couple of changes made at the break to inject some freshness into the Droitwich ranks, Jack Davies’ double secured victory to prepare Owen’s men for their league opener at Wrens Nest in style.

Spa make the trip to the 3G complex at Priory Road on Saturday (3pm) against a side they beat 5-2 last time out, but will be wary of making amends for their frustrating 1-1 draw in their last appearance at this venue almost an exact year to the day.