MARK Owen will look to build on the highs and work on the lows from Droitwich Spa’s roller-coaster top-of-the-table clash at title rivals Allscott Heath.

The Saltmen led four times at the leaders in last Saturday’s West Midlands League Division One thriller, only to be pegged back each time as it ended 4-4.

Shropshire side Allscott still sit two points clear of third-placed Droitwich but Owen’s side will have the chance to leapfrog them on Saturday.

Allscott have no game while the Saltmen head to Wyrley (2pm) and could go top, depending on second-placed Wellington Amateurs’ result at Gornal Athletic. 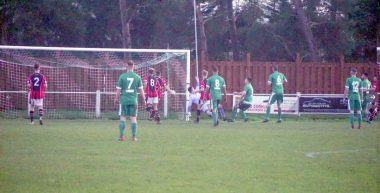 Droitwich thought they had done enough to take over as league leaders last weekend when Connor Collins fired them 4-3 ahead with eight minutes to go, only for the hosts to level with a hotly-disputed injury-time penalty.

It was an even game, with the Saltmen edging the first half and Allscott the second.

Spa took the lead after just six minutes when Jack Davies collected a pin-point cross-field pass to beat goalkeeper Jay Nash at his near post.

The home side battled back and equalised on 17 minutes when keeper Matt Oliver mis-judged a deep cross and Leigh Brindley headed home from a tight angle.

More chances came and went for the away side as Collins, Alex Dugmore and James Lemon all threatened while Nash had to be on his toes to deny Davies a second of the game.

Spa did go back in front, however, 10 minutes before the break as Ben Tilbury finished Lemon’s low cross.

Droitwich started the second half the stronger once again and both Cox and Lemon were denied by Nash but it was 2-2 on the hour mark as Allscott top scorer Tom Fallon finished well after good work from Lewis MacKenzie.

Spa took the lead for a third time five minutes later with Jordan Cox confidently taking the ball around Nash but Allscott were enjoying the lion’s share of possession, and Brindley found himself in acres of space at the back post to convert a simple close-range finish to equalise.

Droitwich thought they had won it when with eight minutes to go Collins finished well from inside the area but more Allscott pressure forced a debatable injury-time penalty, which Fallon held his nerve to convert.