MARK Owen’s Droitwich Spa side are bidding to continue their strong start to the season when hosting Evesham United’s development side in the Worcestershire FA Junior Cup tonight (7.45pm).

James Lemon fires through the legs of the ‘keeper on Saturday. Picture by Mathew Mason.

Four points from the opening two games, following an emphatic 7-1 thrashing of Wrens Nest in their opener followed by Wednesday night’s respectable 2-2 draw against Willenhall Town, mean the Saltmen have continued where they left off last season in Division One of the West Midlands (Regional) League.

In Saturday’s league bow in Dudley, Spa were simply untouchable against the Wrens, who spent the final hour of the game playing with ten men, with James Lemon and Connor Collins both firing hat-tricks

After an even opening, Lemon opened his account for the season with a simple finish from Jordan Cox’s excellent cross on 19 minutes, followed by his second eight minutes later from close-range. 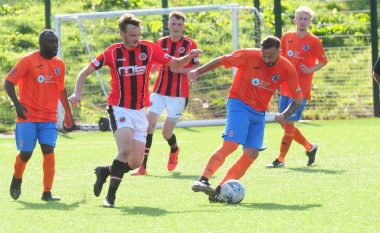 Connor Collins closes in on his marker. Picture by Mathew Mason.

And with Droitwich beginning to find their rhythm, a clash between Lemon and the hosts’ goalkeeper Aarron Morris resulted in a straight red for the latter.

From then on, it was a goal fest for the visitors, with Cox turning goalscorer from an acute angle on 39 minutes, followed by Collins’ first before the break.

With just three minutes of the second half gone Collins doubled his tally after beating the offside trap, and then completed his hat-trick five minutes later.

The hosts did have something to shout about, courtesy of Chris Pike’s tidy finish in the 62nd minute of play.

Spa’s rout was completed when Lemon also recorded his treble with 15 minutes to play, rounding off the dream start to the campaign. 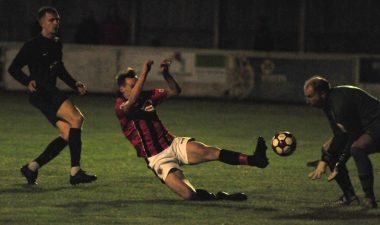 While proceedings were not so straightforward in midweek, Spa at least maintained momentum and their unbeaten start in their first home game of the season.

Early chances for Scott Braiden-Smith, Haydn Morris and Cox showed signs of Drotiwich’s intent, before the latter crashed home a 25th-minute opener via the woodwork after cutting inside.

The Spa forward was inches away from a second after delivering a corner that went dangerously close to finding the net, prior to Chris Adamson tipping over.

Town levelled with minutes of the half remaining through Dilpreet Singh Sandhu’s mazy run and finish, giving the visitors a head of steam which they carried into the second half.

The Lockmen subsequently took the lead on the hour mark after Tyrell McCalla went clean through on goal, giving Owen’s side plenty to think about for the remainder.

Chances came and went for the hosts, but they eventually found reprieve when Collins struck with ten minutes remaining to earn a share of the spoils.

With attentions turning to a first Cup fixture of the season at Walshes Meadow, supporters are reminded to adhere to social distancing and COVID-19 restrictions when attending the game tonight.

Ticket prices vary from £4 for adults, £2.50 for concessions, while under-12’s enter for free.