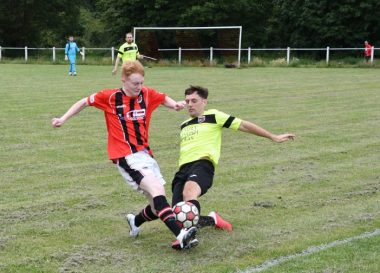 Pictured here against Earlswood Town, Perry Moss, left, was in fine form again in midweek with a brace. Picture by Paul Smith.

A SECOND-HALF fightback from Droitwich Spa ensured that their 100 percent record in pre-season continued in miraculous fashion, after recovering from a four-goal deficit at the break to down Paget Rangers 5-4.

It is now four wins in four for the Saltmen, having seen off Earlswood Town 5-1 last weekend in addition to drubbings of Stourport Swifts under-21’s and Bishops Cleeve by scorelines of 4-1 and 6-2 respectively earlier that week.

But this result could surely not have been foreseen at the interval at the Central Ground – where Rangers are tenants at Sutton Coldfield Town – with Spa looking down the barrel after an emphatic opening 45 minutes from the hosts.

Perhaps buoyed by the openings enjoyed during the one-sided first half, Spa halved the deficit within the first 15 minutes of the second half, before netting three times in ten minutes to stun Paget.

Perry Moss – who also netted in the Earlswood win – was again on target here with a brace, while Charlie Tilley and two trialists also made their mark on away soil.

On Saturday, Droitwich will visit Hereford Lads Club – who ply their trade in the Hellenic League.