Rouslers and Saltmen in desperate wait for league return 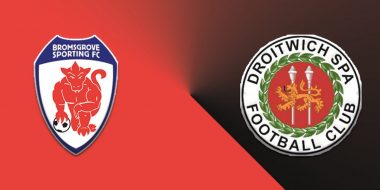 THE PROSPECT of a second successive season being drawn to an early close for both Bromsgrove Sporting and Droitwich Spa has become more probable – in the aftermath of a third national lockdown being announced.

Monday’s televised address by Prime Minister Boris Johnson instructing the nation of the the new measures imposed to combat the COVID-19 pandemic offered non-league football another blow, dispelling hopes of a January restart for a number of leagues.

With football at Step Three and below of the non-league pyramid denied the opportunity to get back underway this month, in addition to team training sessions from taking place, the wait goes on for Brendan Kelly’s Sporting side in the Southern League Premier Central.

The Rouslers have not played a league fixture since October 27, while their last competitive outing against Coleshill Town in the FA Trophy four days later pales in comparison to sides in the National League and National League North/South – which have been permitted to continue under elite status.

And while Sporting fans were provided the rare opportunity to see their side in action over the festive period – a result of the short-lived Red Recruitment Trophy – the final fixtures of the friendly tournament against Redditch United and Alvechurch will now not be played.

To add insult to injury, Bromsgrove’s upcoming Worcestershire Senior Cup tie with Worcester City on January 12 has also been postponed.

Though the Southern League’s discussions will continue in the coming weeks, an earliest possible restart date between mid-February and the start of March does not offer much in the way of genuine hope for the 2020/21 campaign to be concluded.

It would surely be a step too far for most clubs to complete a 42-game campaign, with no team in Sporting’s division yet reaching double figures in terms of number of games played this term.

To provide a direct comparison to last season, when all Southern League Premier Central sides had played at least 30 games prior to the abandonment of the 2019/20 campaign in mid-March, all signs point to further disappointment this time around.

For Andy Crowther’s Droitwich meanwhile, the picture very much looks the same, with the West Midlands (Regional) League also set for further downtime at a similar stage of the season.

The League have announced that all fixtures up until February 15 will be postponed, with a review around that date set to decide the outlook for the remainder of the season.

Even for the Saltmen’s under-18 side, who were back playing before Christmas with two outings in the Midland Junior Premier League, the door has once again slammed shut on the possibility of any match action in the near future.

While both Worcestershire clubs have been twiddling their thumbs, one local player in Jason Cowley has at least been avoiding the lockdown blues, following the forward’s initial one-month loan to Kidderminster Harriers.

Sporting manager Kelly believes the move is a beneficial one for both the player and – potentially from a long-term perspective – Bromsgrove as a club.

“Jason has only played approximately ten games in the last 12 months,” he said.

“With our division currently not playing, it’s a chance for him to do what he loves to do – which is playing football.

“We are still his parent club, and should we get back playing, he will be every bit a Sporting player.”

It will have been no surprise to the Bromsgrove faithful then, that the 25-year-old made an almost-immediate impact for his new side in Kidderminster’s 2-2 draw with York City in National League North in midweek, thrashing home a stunning equaliser in his second substitute appearance.