MARK Owen says his five new signings are shaping up his Droitwich Spa side nicely ahead of the forthcoming West Midlands (Regional) League Division One kick-off.

Goalkeeper Connor Coombes, winger Ollie Thompson and right-back James Deeprose – a trio which appeared sporadicly last season – have all signed permanently for Spa’s first team having previously turned out for the club’s now defunct under-21’s side.

Joining them are midfielders Cameron Monteith, formerly of the HoW Academy, and Adam Watson – who gains his first taste of non-league football.

Speaking on the acquisitions, Droitwich manager Owen said: “The five lads that we have signed have all impressed me during pre-season, I’m really pleased with all of the squad.

“It is taking shape ahead of the new season and we have some good competition for places.”

Droitwich open the new campaign with a trip to Wrens Nest on Saturday, September 19, before their first home fixture against Willenhall Town on Wednesday, September 23. 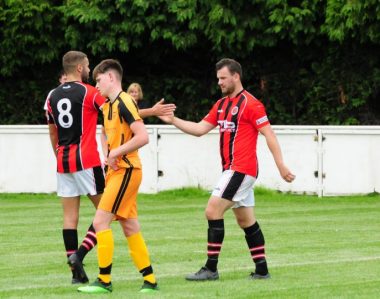 It was all square in Saturday’s latest friendly between tenants Droitwich and landlords Stourport Swifts at Walshes Meadow.

The Saltmen made a breakthrough right on the stroke of half-time when Scott Braiden-Smith fired his side in front, only for Jim Hanson to level things up early in the second half.