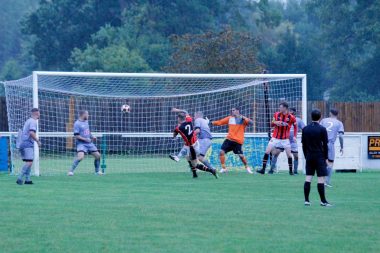 TWO strikes by James Lemon helped Droitwich Spa roar back to winning ways in style in a 7-3 drubbing of Sikh Hunters on Saturday.

Mark Owen’s side were good value for the victory, having led 3-2 at the break before pulling away in the second-half, with Connor Collins, Alex Dugmore, Lewis Phillips and substitute Haydn Morris joining Lemon on the scoresheet – the scoring finished off by a freak own goal.

It was the perfect response from the Saltmen, who fell to a disappointing 2-1 reverse at Tipton Town in midweek which ranked as their first defeat of the campaign, with Spa now up to fourth in West Midlands (Regional) League Division One.

After a nervy opening, defender Dugmore settled the hosts down at Walshes Meadow with a well-timed finish at the back post on 20 minutes. 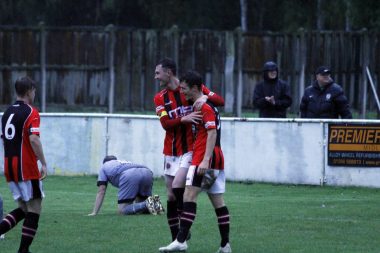 Lewis Phillips, right, is congratulated after finding the net. Picture by Paul Smith.

Soon after, Droitwich had their second. This time it was Collins the scorer with a thumping header – Jordan Cox the provider with an inch-perfect cross.

But Sikh Hunters were not to be denied, hitting back to draw level in quickfire fashion.

A low finish from the edge of the penalty area had Matt Oliver beaten, while a similar strike three minutes later also found the back of the net to leave Droitwich stunned.

Fortunately for Owen and co., Lemon did not read Sikh Hunters’ comeback script – instead helping the hosts regain the lead with five minutes of the half remaining. 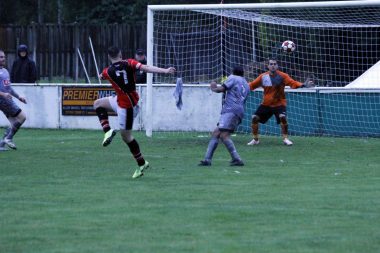 A close-range slot from Phillips eased the pressure for Droitwich shortly after the break, while Lemon’s second packed plenty of zest to leave Spa looking at another fine win.

While the Hunters pulled another goal back, a corner from Anthony Smith found fellow substitute Morris to score a rare header, followed by a bizarre own goal from the halfway line which capped the scoring.

The result preserves an unbeaten home record that now spans 18 months for Owen’s troops, one which they aim to extend further on Saturday (3pm) when Gornal Athletic come to town.