Glenn grateful to Rapids as she continues to shine 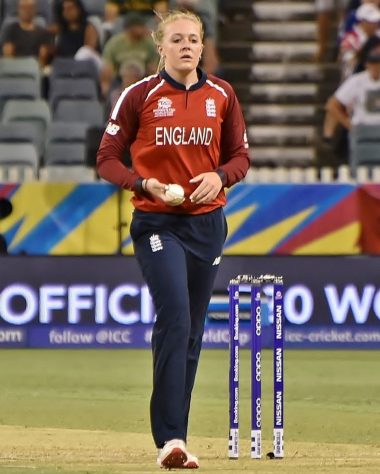 RISING star Sarah Glenn has paid tribute to her team-mates and coaches at Worcestershire Rapids in helping her make the breakthrough at national team level and establish herself as one of the best Twenty20 players.

The 21-year-old leg-spinner is still busy reflecting on a stunning year in 2020 which saw her enter the top ten of the T20 rankings, establish herself as a key England player during the ICC Women’s T20 World Cup and star for Australian side Perth Scorchers in the Women’s Big Bash League.

It was since joining Worcestershire in 2018, following five years with her native Derbyshire, which saw Glenn enter into her own and develop at a higher pace than the cricketer had previously managed, eventually making her international debut in December 2019 against Pakistan.

And, while preparations will soon begin to ramp up once again for the rigours of the 2021 season, the Rapids player is taking the moment to let the past year or so sink in.

“It was definitely a help in my development [joining Worcestershire],” she said.

“I was a bit nervous to start with because I had grown up with Derbyshire pretty much the whole time. I was coming into a new environment but the girls helped me settle in and I felt I could just be myself – which I think helped my performance as well.

“I could play my own game and keep things simple, which I think would have helped me get those wickets because I was just backing my plan.

“The whole staff helped me too, the communication was good in terms of how I explained to them how I want to go about my game – their trusting of that always helps as well.”

The sight of Glenn skittling out opposition players is a sight that has become a regular occurrence for all who share the field with the talented young gun.

For England, she has taken 22 wickets in 15 T20 international games at an economy rate of 5.34 runs per over – a rate she lowered (3.36) in her three ODIs for her country, taking eight wickets.

Although Worcestershire’s 2020 season was curtailed by the coronavirus pandemic, instead forcing Glenn to turn out for regional West Midlands side Central Sparks in the Rachael Heyhoe Flint Trophy, Rapids fans will be keen to see their prized asset star once again when the County Championship gets under way in April.

“I’ve still got a few years to hopefully reach peak performances with all my variations and everything coming together,” she continued.

“I’m just going to take all the positives I’ve had so far into working towards bowling different variations.”