Friendlies announced as Saltmen near return; U18s in eight-goal thriller - The Droitwich Standard

Friendlies announced as Saltmen near return; U18s in eight-goal thriller 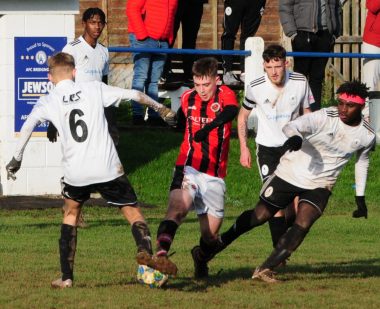 DROITWICH Spa have announced two warm-up fixtures ahead of a potential return to West Midlands (Regional) League Division One action later this month.

The Saltmen have been out of action since a 2-2 draw with Wyrley at the end of October – a match which proved the final outing with Mark Owen at the helm – with new manager Andy Crowther still awaiting his first appearance in the Spa hot seat.

That is all set to change however, albeit in an unofficial capacity, with a trip to Bewdley Town of the Premier Division this Saturday (3pm), followed by a home game with Stourport Swifts’ under-21s side at Walshes Meadow on Tuesday night (7.45pm).

With Droitwich Spa falling under tier two of the Government’s coronavirus system, fans are to be allowed to attend this weekend’s fixture at Ribbesford Meadows – with normal social-distancing measures in place.

All fixtures in the West Midlands (Regional) League are currently suspended following a unanimous decision taken by a league committee, with the earliest scheduled return falling on Saturday, December 19.

Should that be the case, the Saltmen will host Tipton Town for their first competitive outing in almost two months, followed by a Boxing Day trip to Wyrley to round off the year. 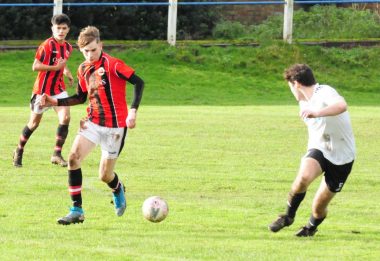 Connor Baker, left, picks up pace during a burst up the pitch. Pictures: Mathew Mason.

Elsewhere, the club’s under-18s returned to life in the Midland Junior Premier League in a whirlwind 5-3 defeat at AFC Telford United.

Spa’s Connor Baker headed home the opener on 11 minutes from Morgan Wood’s right-wing cross, while Telford equalised for the first time that afternoon from the penalty spot following a George Hemming foul.

Josh Bellamy picked out the top corner of the net to restore Droitwich’s lead just before the break, a lead wiped out minutes into the second half after a goalmouth scramble.

And while Louis Mitchell was able to put the visitors in front for a third time with a thumping finish just before the hour mark, an imminent equaliser followed.

Two injury-time goals to win the game for Telford was a bitter pill for manager Jamie Wall to swallow, but he will no doubt have been pleased with the attacking prowess of his side despite close to five weeks out.

Spa’s young guns are back in action this Saturday, hosting a PS Olympic side that sit level on 19 points in joint-third.