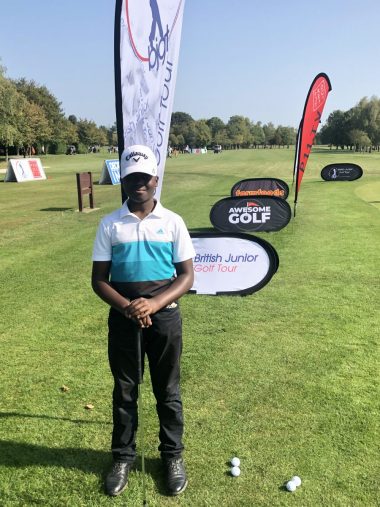 Hayden Sarfo targets another top-ten finish at next year’s Championship.

The ten-year-old will once again head to the prestigious tournament after winning a national qualifying event at Bourn Golf Club near Cambridge, in the process becoming the only junior golfer to have won a hat-trick of qualifying events.

His most recent success was by a score of 76, five shots clear of the rest of the field, and now has ten months to prepare for the Championship at Torrey Pines Golf Club in San Diego, California next July – where he will compete against the best youngsters from all over the globe.

The tournament has been played by a list of illustrious names, notably Tiger Woods, Phil Mickelson and Ernie Els.

His goal looking ahead to next year’s World Championship is to improve on his ninth-place finish and to secure another solid standing inside the top ten.

Sarfo admits that while this year has thrown numerous challenges his way, it has ultimately been a worthwhile one with his plane ticket to the west coast of the United States now secured.

“It has been a tough golf season for everyone so far because of Covid-19 so it was great to play so well and qualify for the world championships again,” he said.

“It’s a really proud moment to have won the qualifier for three years running.

“I cannot wait to travel to California next summer to represent my country. I have played there before and it’s the big tournament everyone wants to be part of. I hope my experience there over the past few years will help me play as well as possible and make everyone proud.

“I am practising hard at weekends and playing as much golf as I can in local and national competitions between now and July. I also hope to play in the European Championships in May which will be great preparation for the big one.”