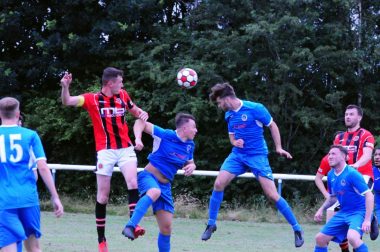 James Lemon tries his luck with a header. Picture by Mathew Mason.

Brandon Hague’s first-half strike was the difference for the Robins at the Glyn Mitchell Memorial Ground, which left Andy Crowther’s Spa side left to pick up the pieces in their final friendly of pre-season on Tuesday night at Cadbury Athletic, where Perry Moss was the Droitwich scorer in a 1-1 stalemate.

Following their trip to Bournville, the Saltmen now have more than a week to prepare for their West Midlands (Regional) Division One opener away to Willenhall Town on August 7. 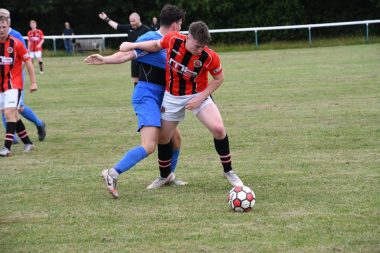 Droitwich were given a physical test against Knowle. Picture by Paul Smith.

MANAGER Keith Draper believes his Fairfield Villa side gave as good as they got, in last weekend’s 1-1 friendly draw with Tipton Town.

New signing Connor Perry-Holmes was again on target in the early stages but the West Midlands (Regional) Division One visitors responded just before the hour mark through Olly Hartland.

“It was a different test, and I thought we should have been well ahead with the chances we created,” said the Swans boss.

“The drinks break seemed to make a difference [in the balance of play], but there was another goal for Connor, a first outing for Will Hawkins, and with seven or eight missing, I was pleased with what I saw.”

Fairfield were also in action on Tuesday night in their penultimate friendly on the road, holding Dudley Sports to a 2-2 draw.

In what proved a valuable warm-up before a trip to Pershore Town on Saturday, a second half full of incident saw the Swans go two goals up through Brad Hendry and Luke Wyatt inside the opening 15 minutes.

But after finding themselves down to ten men in the final 25 minutes of the game, Fairfield wilted and conceded twice late on to wonder what might have been.

After this weekend’s Worcestershire derby, Villa then conclude their pre-season preparations at home to Redditch United under-23s next Tuesday.