THIS QUARTER size Mayflower Ghost Ship model has gone on display at the Netherwich Basin in Vines Park to highlight Droitwich’s links to the Pilgrims’ journey to North America 400 years ago.

The original vessel set off on September 16, 1620, and its arrival in Cape Cod led to the start of the United States of America as a nation. 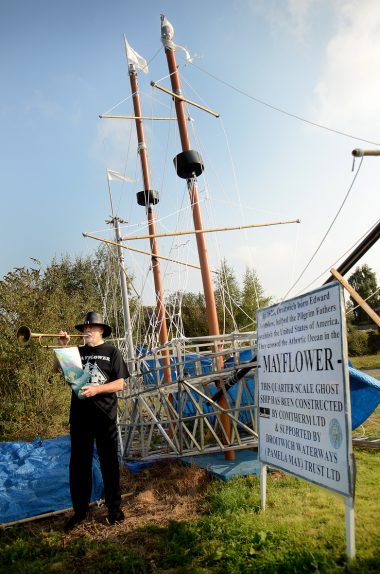 On board was Edward Winslow who was born in Droitwich in 1595, baptised at the town’s St Peters Church and attended King’s School at Worcester Cathedral.

He was classed as one of the most influential of the Pilgrim Fathers, became an ambassador to the Native Americans, was a New World leader and high level civil servant working for Oliver Cromwell.

The Mayflower itself was 100ft long and 25ft wide and capable of carrying 180 tonnes of cargo.

There were 103 passengers (half were Pilgrims) also squeezed onto the vessel.

It had three decks – a main deck for working the ship, a gun deck for the passengers, and a cargo hold.

The gun deck was only five-feet high with a floor area less than a single bed space for each passenger.

The Ghost Ship model was the brainchild of historian Alan Davey and was constructed by Comtherm Ltd, supported by the Droitwich Waterways (Pamela May) Trust Ltd. 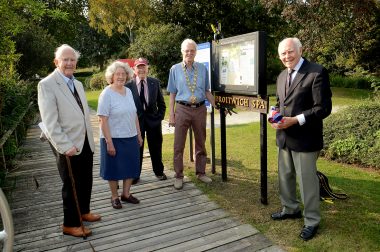 Yesterday, after Alan gave an introduction, Mayor of Droitwich Spa Bill Moy unveiled a plaque and gave a speech.

David Wornham played a special fanfare he had devised and people the ghost ship was unveiled.

Because of the Covid restrictions, the event had to be kept secret beforehand.

Alan said: “We could only have six people there but I am hoping lots of people will go and see it, learn about the Mayflower and Droitwich’s links to it.”

The model will remain on display in the park until the end of the year.

There are plans to light up the vessel on a couple of evenings in November to mark the time the Mayflower reached its destination.