A DAY of celebrations were held at St Peter’s Droitwich C of E Academy yesterday to celebrate The Queen’s Platinum Jubilee.

Children and staff dressed in red, white and blue and wore homemade crowns, the school and playground were awash with colourful bunting and jubilee decorations made by the pupils, including a large portrait of the Queen.

Throughout the day children were involved in variety of jubilee-themed activities and party games including croquet on the school field, giant connect 4, sack races and ring toss. 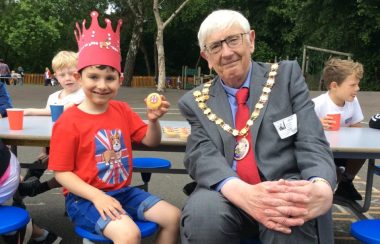 Other classic games included pass the parcel and musical statues. Music filled the air and Union Flag cakes were served. The whole school joined in a Teddy Bear’s Picnic at lunchtime with a party food bags and a jubilant atmosphere.

Chairman of Wychavon District Council, Coun Alex Sinton, visited and got involved with many of the activities.

He also spoke to the children about his memories of watching the televised Coronation of Queen Elizabeth in 1953 and the street parties that followed.

Headteacher, Tracey O’Keeffe-Pullan said “We hope the children will look back in years to come and remember the Platinum Jubilee celebrations they enjoyed with their friends at school today.”