THERE have now been 50 people stopped and reported for a variety of driving offences on the region’s motorways as West Mercia Police and Highways England brought back ‘Operation Tramline’.

Operation Tramline was launched last year and uses specialist unmarked HGVs to catch drivers breaking the law behind the wheel.

After the first day of the reintroduced operation on Monday when 16 vehicles were stopped on the M5, M42 and M50 for not wearing seatbelts, having no insurance or MoT and other offences, yesterday, a further 15 were caught.

A further 18 were caught on Wednesday.

One was also caught on Monday drug-driving.

One was also caught on Monday drug-driving and on Wednesday they caught a motorbike dangerously overtaking on the hard shoulder (video below).

#Optramline – Not just trucks – this motorcyclist thought this manoeuvre was a good idea. Rider reported. (3551) pic.twitter.com/KmpviKsxp9 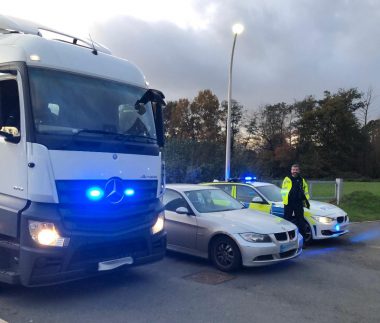 The HGV, a tractor cab, is used as a spotter vehicle, as the raised position above the drivers allows officers to see into vehicles.

Those deemed to be driving illegally are then stopped and dealt with by other police vehicles.

Police officers are able to more accurately identify the use of mobile phones, illegal speeds, motorists not wearing seat belts and those driving under the influence of drugs and alcohol.

Officers from Worcestershire’s Operational Policing Unit also took more than 20 drivers off the road last week for having no insurance and a host of others for driving offences as part of ‘Operation Tutelage’.