The much-loved piece, first created and installed in 1976 by Philippa Threlfall and her husband Kennedy Collings, has adorned the wall of what is now ‘Café Morso’ by the entrance to shopping centre for the past 43 years, depicting different aspects of Droitwich Spa life. 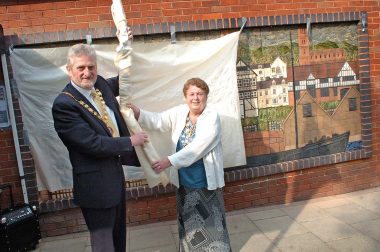 After many years of hard work and perseverance, the Droitwich Arts Network (DAN) successfully led the project to restore the mural which had suffered years of almost irreparable damage.

Philippa and her son Daniel Collings, owners of the company ‘Black Dog of Wells’, carried out the restoration work, restoring details, strengthening panels and bringing it back to its former glory. 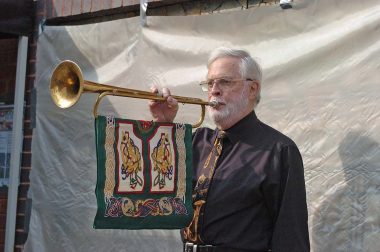 A bugler gets the occasion started. Picture by Marcus Mingins 1619023MMR2 www.buyphotos247.com

While the mural was been restored local artists, schools and clubs displayed their work on 28 panels put in its place.

“The ceramic mural had been restored to its original glory.

“Some people thought it was a new item.

“In addition, having been reinforced, it should now have a very long life.” 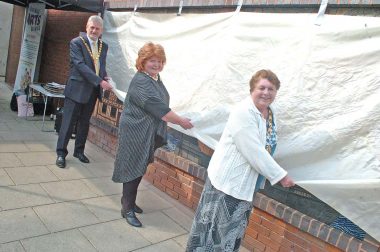 He added the next stage is to persuade the owners of the wall to allow two information plaques to be fixed, one in English and one in Braille, giving a description of the Droitwich buildings on the mural and where they are located in the town so future generations and visitors could identify the historic buildings. 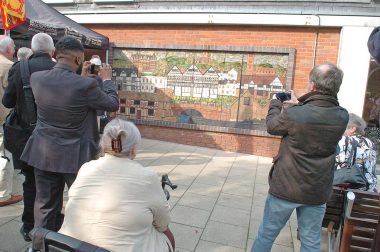 Groups who organise the Saturday Town Walks are being encouraged to include the mural and it features in a one hour talk entitled ‘The Treasures of Droitwich’.

The ceremony, which featured live musical entertainment, was led by Droitwich Arts Network Chairman Helen Karakashian and was attended by the Mayor and District Chairman.