MORE than 60 residents packed into the hall at Hanbury CE First School to discuss issues surrounding the speed limits and warning signs on the village’s roads.

The meeting was organised by the area’s MP Rachel Maclean who also lives in the area.

The force’s new Chief Constable Pippa Mills, who has been getting out and about across West Mercia since starting last Friday, also attended. 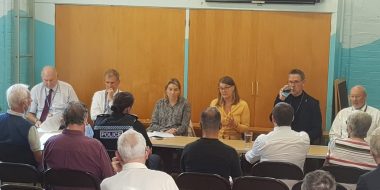 Ms Maclean said she wanted to hear from people about their experiences of taking their children to school, visiting places in the village and going out for walks.

There was anger and sadness expressed that the meeting had only been organised after a fatal incident at the start of the month where much-loved Hanbury resident Rona lost her life. The fatal incident is currently being investigated by West Mercia Police to shed light on the circumstances surrounding it.

Concerns were expressed about the speed limits – Hanbury First School is the only one in the county to have a 40mph limit outside its gates.

As well as the speed issue – with some areas at national limit and others at 40mph – the school is on the brow of a hill where visibility is poor.

Milton Bowers, the chair of governors, said: “We have already had a fatality in the area and fear every day of the week that someone else could be killed or seriously injured.

“The thought of our school losing a mother, father, son, daughter or classmate is too awful to contemplate.”

Resident Abigail Ford said she worked in the Queen Elizabeth Hospital’s Major Trauma Unit and had seen the impact road accidents could have on those involved and their families.

“Worcestershire County Council has a duty of care and nothing seems to be done.”

Among the dangerous roads in the village were the B4090, the B4091, School Road, Forest Lane and Goose Hill Lane where a grass triangle island made visibility difficult – that, residents said, should be a T-junction.

It was also highlighted that warning signs, such as the ones outside the school, were ‘in the wrong place’ – not giving adequate time for drivers to react or slow down.

Hanbury was also used by many drivers as a cut through between Droitwich and Redditch and there was a large volume of HGVs heading to Harris Brush in Stoke Prior.

Campaigner Lizzy Evans submitted a petition containing 847 names, calling for something to be done to improve safety.

Ms Gilmore said the roads and their limits were being examined, in conjunction with the police, but the county council had to prioritise where to use its limited resources.

She added they were looking at the possibility of 30mph limits in some areas but reductions to 20mph – which residents have called for outside the school – were often only in built-up areas with street lights and a large number of frontages.

An alternative would be ‘suggested’ 20mph speed signs outside the school to provide an extra warning to drivers.

She said the positioning of the signs would also be examined.

She added Hanbury was unusual in that the village hall and school were outside the village centre.

A review was also being carried out on the roads at Hanbury Wharf.

Team speed monitoring boxes had been put on the B4090 and were due to be installed on the B4091 after that was completed.

Then, they added, more would be known and decisions could be taken on traffic calming measures.

Mr Campion praised the Droitwich SNT officer PC Warren Edmunds for carrying out recent speed monitoring and he said cash was available from the PCC’s office to be put towards Vehicle Activated Signs (VAS).

Ms Maclean concluded the meeting by saying the campaign had been going on for a long time and must continue to keep up the pressure and bring about action and change.

She was determined to be part of the fight to improve safety.