Farmer 'lamb-basted' after sheep gets stuck in fence in Hanbury

A SHEEP in Hanbury has been rescued by the RSPCA after it got stuck in a wire fence.

The animal welfare charity was contacted after a member of the public who saw the animal trapped near a public footpath on Holmes Lane.

RSPCA inspector Suzi Smith arrived at the scene and was able to free the sheep from the fence straight away and she had not sustained any injuries.

She said: “This sheep was clearly distressed and just couldn’t escape the fence.

“Sadly it is a common problem with sheep getting stuck in brambles or fences.

“It did take some time to get to the location – about an hour and a half – which could have been spent responding to another call as the farmer could have dealt with this situation.” 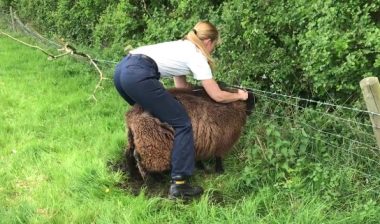 The RSPCA has issued advice to farmers to put emergency contact numbers on their footpath gates so they could be contacted by passers by if they spot a sheep or other lifestock in a difficult situation.

The charity added – due to a high volume of calls it was currently experiencing – people should only report absolute emergencies.

It added there was plenty of advice on the website on how to help animals in many scenarios.