THE CHAIRMAN of the organisation which runs Droitwich’s King George V Playing Fields has hit out at vandalism which has been going on for more than a year and left the community constantly footing the bill for repairs.

Richard Whittall, from the Droitwich Spa King George V Sports Association CIC, said: “It’s been going on so long now and we’re all fed up with it.

“The majority of people who use the playing fields for sport, dog walking and general leisure activities respect the facility and what has been achieved.

“But there is a small group of morons who show no respect for the facilities and the community as a whole.”

In the latest attack, four panels from the spectator shed were kicked out with two sustaining further damage and graffiti was daubed on the door.

Previously, changing rooms were broken into and used for drug-taking with needles and other paraphernalia found there on a regular basis. 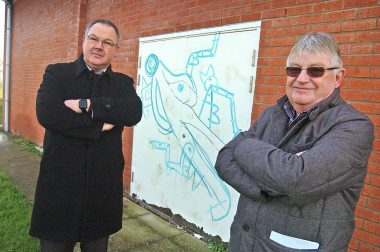 There have been three fires started in the spectator shed and a blaze lit at the base of a heavy electric cable.

Cars have been used to do figures of eight on the main pitch and motorbikes have grass-tracked over other pitches.

Lighting has been torn from a wall, roofs have been climbed on, locks have been damaged on gates and signs – eight laminated emergency vehicle parking signs and six metal ones – have been ripped off.

Two heavy duty benches which cost £475 each have been damaged – one was heavily burnt in the middle, one of the seats was ripped apart and both benches were heavily damaged with carvings and graffiti. One was stolen and found a mile away under a bridge over the River Salwarpe.

The fields are used by more than 30 football and hockey teams and Mr Whittall added everyone had a duty to take pride in them.

He added the layout made it difficult to put up cameras so they would be out of reach but said the CIC was looking into a way of installing CCTV.

PC Richard Rees from Droitwich Police’s Safer Neighbourhood Team said patrols were carried out at the fields but because of their isolated location and so many ways in and out, it was a difficult area to police.

He urged any dog walkers or anyone who sees anything suspicious to call the police straight away on 101.