THERE was a day to remember for three Droitwich residents yesterday when they were presented the medals they were awarded in The Queen’s Birthday Honours List.

The trio were handed their accolades at a special ceremony at Worcester’s Guildhall by the Vice Lord Lieutenant of Worcestershire Brigadier Roger Brunt.

Richard, who grew up in Kidderminster, joined the Salvation Army at the age of eight and is now a member of the Droitwich branch.

Richard, who has been in the Spa town for five years, has kept up his work with the charity in each of the areas he has lived in, which included Malvern. 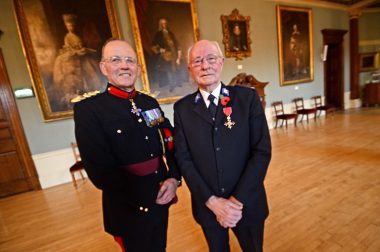 He has worked on community projects for more than 50 years and has helped raise hundreds of thousands of pounds for local and national charities, including funding refurbishments to hostels (now life houses).

Among his favourite events have been three concerts at Birmingham Symphony Hall, including one which featured an appearance by brave Falklands veteran Simon Weston.

He has also organised concerts at Dudley Town Hall and Worcester Cathedral.

He was accompanied at the guildhall by his wife Pauline, sister-in-law, sister and brother-in-law.

Speaking after yesterday’s ceremony he said: “It was a lovely occasion for the family – a really special day for us all.

“The Vice Lord Lieutenant was marvellous and we were treated so well.”

Unfortunately Richard’s son had to work but he will be accompanying him, and other family members to The Queen’s Garden Party next year.

Tonia, the Chief Officer of Droitwich CVS, and Craig, the vice-chairman of Droitwich Rugby Club, were instrumental in supporting the people of Droitwich during the coronavirus pandemic. 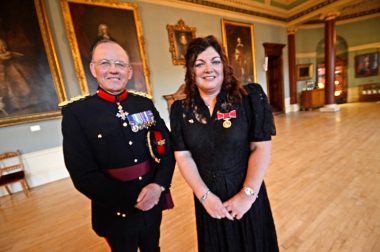 During the first lockdown, DRFC partnered with Droitwich CVS to deliver food and support to the whole Wychavon community.

The scheme provided 16,000 meals, along with help and support, via food parcels and wellbeing packs.

People gave up their time to ensure Droitwich and the surrounding areas were covered and people received everything they needed.

Droitwich CVS took calls and requests from those in need whilst Droitwich RFC converted the club house to allow the organisation to purchase, source, package and distribute the food parcels to the local community.

Tonia said: “You don’t know what to expect before you go and it was a really enjoyable afternoon.

“It was quite an intimate occasion and nice to be there with Craig so we could receive our awards together.

“When we were stood in front of the Vice Lord Lieutenant and they read out the citation it was very humbling – it was a crazy time and I had forgotten most of the things we had done.”

Tonia’s family and friends, including her husband, son, parents, sister and in-laws accompanied her, and they went for a celebratory meal afterwards. 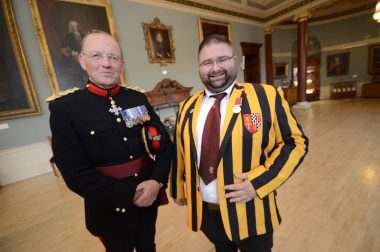 Craig said: “What a fantastic day at the Guildhall to finally celebrate with our fellow award-holders from the town and our family and close friends.

“As I’ve said all along, this award was not just for me – it was shared among the many hundreds of volunteers who helped throughout the process.

“Hopefully the awards will inspire more people to get involved within their communities and help where they can.”