MP for Bromsgrove and Home Secretary, Sajid Javid has been announced as the new Patron of the Primrose Hospice, writes Sophie Wheeler.

The announcement was made at a charity business lunch on Friday February 1, held at the Holiday Inn on Kidderminster Road.

Mr Javid made the announcement to over 70 people from Worcestershire’s business community after being asked to become patron by Primrose’s Chair of Trustees, Rod Laight.

Primrose Hospice based in St Godwalds Road, Bromsgrove supports life-limited people and their families who are living in north east Worcestershire and people who have experienced a sudden death in the family. 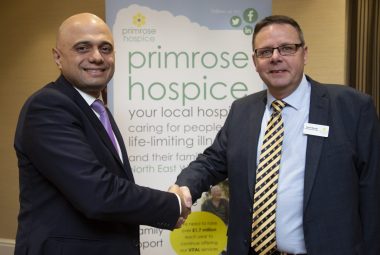 Mr Javid said: “Rod approached me about becoming patron and I obviously accepted.

“And it’s the same reason we’re all here today, we know just how wonderful Primrose is.

“The huge difference it makes.

“Sadly the people who have benefited from Primrose many have been in the darker moments of their life and Primrose brings in some sunlight.”

The lunch was hosted by television and radio presenter Joanne Malin and raised over £2,500.

The charity needs to raise £1.75 million each year to keep its services free to patients and family members.

Guests at the lunch enjoyed a question and answer session with Mr Javid discussing issues affecting his hometown of Bromsgrove, knife crime and Brexit.

“Sajid has supported this local charity for many years.”

Conversation also turned to how the MP juggles family life and his role as Home Secretary and who he thought would win Strictly Come Dancing if he were to compete against PM Theresa May.

The next networking event will be on Friday May 17, at Basepoint Business Centre from 10am till 12pm.