STANDARD readers have been asked for their help in finding relatives of a woman whose headstone was found in Bromsgrove woodland.

The mystery started when the memorial – marked up as ‘EMD 1842 to 1922′ – was discovered on land outside St Michael and All Angels’ Church.

It has been looked after by Jonathan and Jo Till who live at Aldham House that was once the Rectory at Stoke Prior and own the woodland.

Research by Jonathan, Jo and the friends of the church have found the stone belongs to Eliza Mary Dee of Clapham who was buried on August 10, 1922, aged 80.

It is thought a member of the clergy at some point in the church’s history moved some stones to the woodland outside the graveyard because they were deemed unsafe although so far this is the only one which has been found.

Records show Eliza’s and her family’s graves are in the churchyard. Although the area in which the graves are is known, the exact locations of them are not. 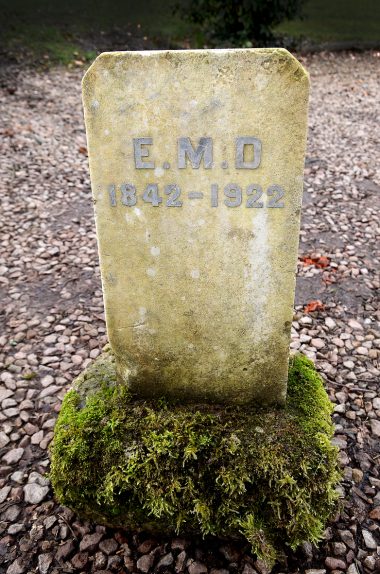 If some light could be shed on the grave’s whereabouts, the stone could be moved back to its rightful place – back with Eliza’s family – and a short service could be held with her modern day descendants present.

Research has found a curate from Clapham came to conduct her funeral service.

Eliza’s husband George apparently sometimes called himself George Silver Dee and their surname in the 1881 census was recorded as Silverdee.

George S Dee was resident in the village because he was John Corbett’s accountant at the Salt Works.

The Salt King used a London accountancy firm which would provide a logical explanation as to how the family came to be in Stoke Prior, despite originating from the Capital.

Both daughters – aged around eight and five – died in 1886 which was the same time as their father.

Their deaths were registered in Aston rather than Bromsgrove.

Another child – Alice Mary or May – was born in 1884 in Aston to Elizabeth.

By the 1891 census, Eliza is living back in London with her surviving children.

They came from London / Middlesex and returned there, apart from their brief period in Birmingham in the late 1870s.

Aston and Stoke Prior are around 30 miles apart, on the northern and southern outskirts of Birmingham respectively which has posed questions as to whether they were related to the Dee family of silversmiths although no connection has been found online and George himself was not a silversmith

Both Eliza May Dee (daughter of George Dee) and her husband George Silver Dee were born in London, married in Holborn in 1865, had seven children in all and lived in places across London, as well as Stoke Prior in Bromsgrove and Aston in Birmingham.

When the pair married, George was an orphan and a commercial traveller but at some point he upgraded and traded as an accountant. He died in 1886, in Aston.

George Silver Dee was also secretary of the Stoke Works School’s Board of Managers in 1879.

After her death, Daisy was brought back to Stoke Prior to be with her sister Mary which raises the question whether Ethel and even George Silver were also there.

After George, Ethel and Daisy died, Eliza moved back to London. She was living in Tottenham at time of 1891 census (as head of household) and then in her son William’s house in Clapham in 1901 census when William was 30.

The 1911 census for daughter Alice at Gauden Road lists her as ‘daughter to head of household’ but Elizabeth is not present.

The same address in 1922 electoral roll has both mother and daughter so Eliza was presumably visiting elsewhere on the night of 1911 census.

Eliza’s death was registered in the Wandsworth district in 1922.

She was outlived by four children (three sons, George, William and Charles and a daughter Alice).

For a family burial plot, Stoke Prior was perhaps the only obvious choice, even though the family lived in the area very briefly.

So it appears that Eliza’s body was returned to be buried in the same graveyard as at least two of her daughters.

Gary Stokes from the friends of the church said: “We would love anyone with any information to get in touch so we can reunite Eliza’s stone and the others in her family.”