AN AMBITIOUS project has been unveiled to transform up to four unsightly underpasses on Droitwich’s Westlands estate in a bid to cut crime and anti-social behaviour.

The announcement was made at the meeting of Droitwich Town Council on Monday and was welcomed by members who also said they would like to see it extended throughout the town.

The underpasses earmarked as part of the Wychavon District Council plan include the one from the King George Playing fields, under the A38, to the Westlands and the walkways at Hunters Way, Crofters Hill and Paddock Hill.

Artwork will be created in and around the chosen areas and lighting would also be improved.

Presenting the proposals were David Manning from the district council and Peter Rose from Tiller Research who spoke about the similar Redditch Roadway Project he played a key role in more than a decade ago.

The pair said, like in Redditch, Droitwich’s underpasses were dark, dank and felt threatening and uninviting to some.

After the Redditch ones were enhanced, their impact was analysed and found the perception of them improved drastically because of their new look, the way they enabled the community to take ownership of the sites and the way they increased community pride, reduced fear of crime and anti-social behaviour and cut vandalism. 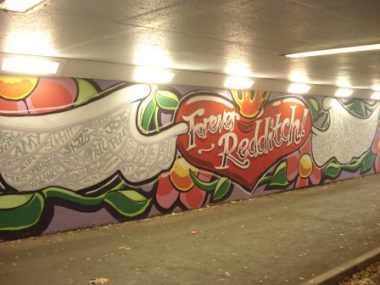 Mr Rose, who grew up in Droitwich and attended the high school, said: “People took more notice of what was going on in the enhanced areas and the community pride led to other actions like impromptu litterpicks.

“They went from places where people did not like to go to areas where they went out of their way to visit.

“There was even walking tours organised so people could see the artworks in the different underpasses.”

A consultation in Redditch asking about themes found, as well as modern designs, people wanted to see local history and landmarks celebrated. 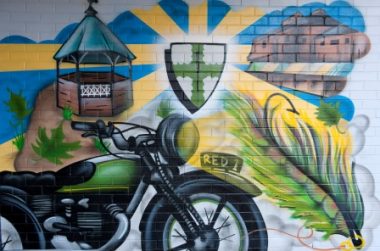 The artwork was carried out primarily by young people from local schools and youth groups with assistance by the local arts society.

Mr Manning and Mr Rose said on Monday they had spoken to Droitwich Spa High School, the Youth Council and DAFFY and would enthusiastically welcome the Droitwich Arts Network being involved in the project.

“There is considerable benefit to getting as many people as possible involved,” added Mr Rose.

Mr Manning said as part of the Wychavon’s Droitwich West Aspirations scheme the budget was in place for the underpasses and he hoped the process would be completed before April, within this financial year.

As well as the underpasses, overgrown areas on the fringes of the estate could also be cut back to open them up and make entering and exiting the estate more pleasant.

In Redditch artwork was also created on bus shelters – to promote things like sustainable transport – but it was stated the structures in Droitwich were metal and did not lend themselves easy to having designs put on them.

The next phase would be to gauge people and groups who would be interested in being part of the project.

They would then get together to determine the themes.

And looking at the wider picture, once it was established how wide the scheme could potentially be extended to, a steering group would be set up with stakeholders.

The scheme was unanimously backed by councillors with Coun Sandy Laid saying: “It is a very exciting project that we all support.”

Coun Nathan Griffiths, a former Droitwich Spa High School student, said it also had the potential to improve road safety as well as community safety if it was extended to the underpasses near schools.

“When I was at school pupils – including myself – sometimes risked crossing the busy road because we did not want to go through the nearby underpass and some students still do this now.”

It was mooted a ‘Safer Routes to School’ scheme could also be linked in with the transformation project.

Email david.manning@wychavon.gov.uk for more information or to register interest in being involved in the project.