Blobbie Williams wants to entertain you at Huntington Hall

Blobbie Williams is the most original and respected Parody/Tribute to the ultimate entertainer Robbie Williams and is officially back after Lockdown but this time ‘Bigger’ & better than ever!

Blobbie has fast become a friend to the stars after performing alongside many household names in the Music & TV industry. With interviews and appearances from Hollywood to Australia, New York to Brazil and everywhere in-between, Blobbie really is a Global Icon!

Whilst filming for a CBBC tv show at Elstree Studios, the Director stopped filming and said “Sorry, I worked with Robbie just the other week, you look and act the same and it’s freaking me out!” High praise indeed!

He’s made an appearance in the Keith & Paddy Picture Show on ITV with Keith Lemon, Paddy McGuinness and the man himself Robbie Williams when they recreated the hit movie Ghostbusters.

“I love you make a living impersonating me, I’m a big fan of yours, you’re a beautiful man!”.

While his wife Ayda thinks Blobbie looks eerily like her husband and it’s like looking into the future! Even Simon Cowell himself said that he will never forget Blobbie and he’s a very good looking man… Obviously!

Supporting stars like Olly Murs, The Human League and Shane Richie amongst many others, Blobbie will take you on his rollercoaster of songs. So, be prepared to go crazy as you sing, dance and belly laugh along with all your favourite’s like Rock DJ, Let Me Entertain You and Candy, LET ME ENTERTAIN YOU & CANDY through to the classic Angels.

This year Blobbie has got the one and only ‘HUGE’ star FATTIE MERCURY supporting him and they go together like jelly & ice cream. There is no doubt ‘They Will Rock You!’

There may be many tributes to Robbie Williams, but there will only ever be one BLOBBIE WILLIAMS. 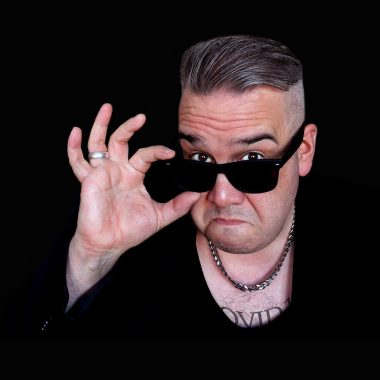 Becky Hill to perform at Beach Volleyball on Wednesday 3 August